The top 10 Sunday Times bestselling novel about a family at war with itself, set in ancient Greece.

‘A giant amongst storytellers… it is a masterpiece’ Daily Telegraph

In his 25th anniversary edition of Diana:Her Story – In Her Own Words, first published to huge public controversy and accusations of fabrication, Andrew Morton is able to shed light on Diana’s personal, private experiences as a troubled member of the Royal family. The books includes transcripts of detailed tape interviews in which she describes all aspects of her life, including her ten-year struggle with bulimia and her husband Charles’ affair with Camilla Parker-Bowles.

Morton describes the interviews, conducted secretly and through a proxy, as Diana’s way of getting her voice – and her side of the story of their failing marriage – heard, at once searingly sad and monumentally brave. “It is a chance for my own self to surface a little rather than be lost in the system,” she wrote to her father during the interview process. “I rather see it as a lifebelt against being drowned and it is terribly important to me.”

House of Names, the new novel by Colm Tóibín will be published by Viking on 25th May. Events will include talks at the Hay Festival, Bath Festival, Charleston Festival and at the Guardian.

In his ground-breaking new book Professor Robert Cialdini offers revelatory new insights into the art of winning people over. It isn’t just what we say or how we say it that counts, he argues, but also what goes on in the moments before we speak. Effective persuasion requires effective pre-suasion.

Frequently regarded as the ‘Godfather of influence’, Cialdini’s New York Times bestselling book Influence swiftly established him as the world’s foremost authority on the science of persuasion.  It has sold over 3 million copies and has been translated into 30 languages.  Warren Buffett declared Influence to be among his favourite business books, and it has also won plaudits from such major thinkers and writers as Daniel Kahneman, Daniel Pink, Tom Peters and Chip Heath.
His forthcoming book Pre-Suasion draws on a series of compelling case studies and a profound understanding of human psychology to explore those key seconds that determine the success of an attempt to influence, persuade or win over. As such it will be of invaluable practical help to people such as advertisers, publicists, fund-raisers, recruiters – even parents negotiating with recalcitrant children. At the same time it will reveal to the general reader the pre-suasive ploys used by successful influencers – from marketers to politicians – to ensure that their message gets across.  For full details visit the Pre-Suasion campaign page.

Introducing a witty, perceptive and refreshingly candid new literary voice – Mara Wilson, the beloved child star of Matilda and Mrs Doubtfire, writes openly about her experiences growing up on film sets and finding her place in the world in her forthcoming book Where Am I Now?  For details visit the campaign page.

“Wilson is more compelling as an adult than she was a child. Her writing is sharp, funny, and critical of the film industry and expectations placed on women who live their lives in public.” – Longreads.com

“The coolest girl to ever dump Hollywood.” -Refinery 29

“Growing up, I wanted to BE Mara Wilson. I always loved that she portrayed strong characters, especially as a female, even as a young child. Where Am I Now? is a delight.” – Ilana Glazer, co-creator and star of Broad City

“Former child star Mara Wilson has grown up to be a moving, funny, and thoughtful storyteller. Well, not up. As I understand it, she’s still approximately the same height.” -Megan Amram, comedian and author of Science . . . For Her!

“You don’t have to be a fellow neurotic Jew who grew up in Southern California to adore this book. Though Mara Wilson’s childhood was unique, the themes of Where Am I Now? are universal.” –Rachel Bloom, creator and star of Crazy Ex-Girlfriend

Delighted to be working on this truly innovative memoir from the bestselling author of ‘ Encyclopedia of an Ordinary Life’ . This is the first book to offer an additional layer of reader engagement via text messaging as well as her usual distinct blend of observational humour and wistful reflections on life. 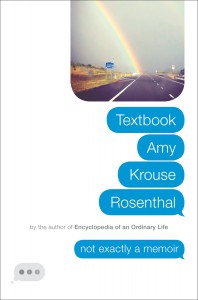 Jonathan Tel has won the 2016 Sunday Times EFG Short Story Award with ‘The Human Phonograph’, a beautifully observed story of a marriage lived in the shadow of the Chinese nuclear weapons programme of the 1960s. He was previously shortlisted in 2014 for his story, ‘The Shoe King of Shanghai’.

Tel beat off strong competition from five other exceptional writers – this year’s was a truly international shortlist of great breadth and skill. Alongside Tel, it comprised American Edith Pearlman, author of over 250 works of short fiction; the Irish writer Colum McCann, Man Booker longlisted author of Transatlantic; Zimbabwe’s Petina Gappah, winner of theGuardian First Book Award and longlisted for the Baileys Prize 2016; American writer Alix Christie and Canadiannovelist Nicholas Ruddock, both of whom set their stories in European cities.

‘The Human Phonograph’ is set in the mysterious Factory 221 in Qinghai and examines the relationship between a husband and wife who have not seen each other for seven years.

Judge and best-selling author, Rose Tremain commented, ‘The hesitant relationship between a husband and wife who barely know each other forms the basis of this troubling, well-wrought story, set on a Chinese nuclear base in the 1960s and 70s.  But it is the image taken from the title – of a man who, in a silent, punitive and desolate world, can remember the old songs and sing them perfectly every time – that elevates it to something truly memorable. The decision to award the prize to this work was unanimous among the judges and we all feel that Jonathan Tel has a bright future as a fiction writer’.

Andrew Holgate, judge and literary editor of the Sunday Times said, ‘Jonathan Tel’s winning story is a remarkable and very moving feat of storytelling and it’s all the more remarkable when you consider the huge number of entries we had this year – over 800, a record for the prize.’

The winner was announced at a gala dinner hosted by EFG at Stationers’ Hall in London on Friday 22nd April.

The 2016 Sunday Times EFG Short Story Award is the world’s richest prize for a single short story. This, its seventh year, sees the award again cementing its reputation for showcasing both established and emerging writers.

As winner, Jonathan Tel will receive £30,000. The five other shortlisted writers will each receive £1,000.

Readers can read the winning and shortlisted stories on the new website for the prize:www.shortstoryaward.co.uk

One of the most influential novelists of his generation, Irvine Welsh, will be appearing at the University of Huddersfield on Sunday 3rd April as part of the 2016 Huddersfield Literature Festival.  This is the first event of Welsh’s UK The Live Blade Tour for his long-awaited new novel The Blade Artist, which is published on April 7th by Jonathan Cape.  The Blade Artist sees the dark past of Trainspotting character, Begbie, catch up with his reinvented present-day self.  Welsh will appear in conversation discussing the novel and his career.