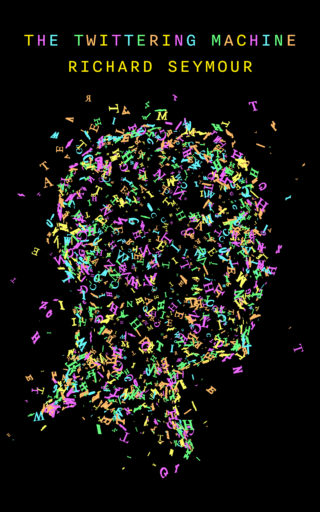 The Twittering Machine is a painting by the surrealist artist, Paul Klee, where the bird-song of a diabolical machine acts as bait to lure humankind into a pit of damnation. Leading political writer and broadcaster Richard Seymour argues that this is a chilling metaphor for spiralling social media use.

Anyone who has lived through the rise of the internet, the spread of smartphones and the ascent of social media platforms will have seen a remarkable shift taking place. As writing has shifted from analogue to digital, it has become massively ubiquitous. Never before in human history have people written so much or so frantically: texting, tweeting, thumb-typing on public transport, updating statuses during work breaks, scrolling and clicking in front of glowing screens at 3am.

And as we type we share ourselves. Every minute detail of our lives is surveyed and catalogued by social media giants who are driven by consumer markets, driven by the belief that they now know us better than we know our own selves. The nuance added by these platforms is that they don’t necessarily have to spy on us. They have created a machine for us to write to. The bait is that we are interacting with other people, our friends, professional colleagues, celebrities, politicians, royals, terrorists, porn actors, anyone we like. We are not interacting with them, however, but with the machine. We write to it, and it passes on the message for us, after keeping a record of the data. Former social media executives tell us that the system is an addiction-machine. Like drug addicts, we are users, waiting for our next dopamine hit as we like, comment and share. We write to the machine as individuals, but it responds by aggregating our fantasies, desires and frailties into data, and returning them to us as a commodity experience.

In The Twittering Machine, Richard Seymour takes us on a journey into the dark side of social media, exploring just how far we have strayed from the internet’s utopian potential. His analysis is infused with psychoanalytic reflection and includes insights from users, developers, security experts and others. Probing the human side of this machine, The Twittering Machine asks what we’re getting out of it, and critically, what we’re getting into.