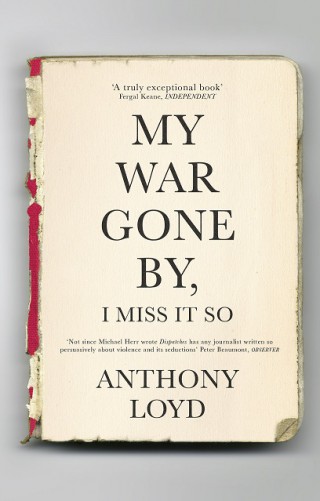 MY WAR GONE BY, I MISS IT SO

Born to a distinguished military family, Loyd longed to experience war from the front line. After serving in the Gulf War as an Infantry Officer he took himself to Bosnia, determined to become a war correspondent. Once there he became enmeshed in one of the most callous and chaotic clashes on European soil.

Addicted to the adrenaline of armed combat, when he returned home he found no more peace than in the midst of battle. And so began a longstanding personal battle against drug abuse.

These harrowing accounts from the trenches show humanity at its worst and best. Acknowledged as a classic of the genre, this book is a breathtaking feat of reportage, an uncompromising look at the terrifyingly seductive power of war.

‘A truly exceptional book, one of those rare moments in journalistic writing when you can sit back and realise that you are in the presence of somebody willing to take the supreme risk for a writer, of extending their inner self. I finished reading Anthony Loyd’s account of his time in the Balkans and Chechnya only a few days ago and am still feeling the after-effects … I read his story of war and addiction (to conflict and heroin) with a sense of gratitude for the honesty and courage on every page’

‘An extraordinary memoir of the Bosnian War … savage and mercilessly readable … deserves a place alongside George Orwell, James Cameron and Nicholas Tomalin. It is as good as war reporting gets. I have nowhere read a more vivid account of frontline fear and survival. Forget the strategic overview. All war is local. It is about the ditch in which the soldier crouches and the ground on which he fights and maybe dies. The same applies to the war reporter. Anthony Loyd has been there and knows it’

‘An astonishing book … a raw, vivid and brutally honest account of his transition from thrill seeker to concerned reporter’