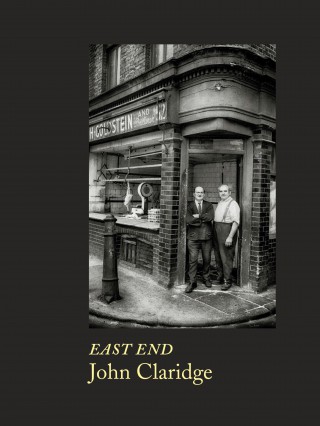 John Claridge was perhaps East London’s most prolific photographer during the sixties.

Collecting together more than two hundred of his stylish and evocative images, EAST END, is a candid insider’s portrait of an entire society observed by a unique photographic talent.

At the age of eight, John saw a plastic camera at a fair on Wanstead Flats and knew he had to have it. And thus, in that intuitive moment of recognition, his lifelong passion for photography was born. Saving up money from his paper round in the London Docks, John bought an Ilford Sport and recorded the world that he knew, capturing images with a breathtaking clarity of vision.

“Photography was a natural language, this was my life.”

With admirable self-assurance, John left school at fifteen and informed West Ham Labour Exchange of his chosen career. They sent him up to the McCann-Erickson advertising agency in the West End where he immediately acquired employment in the photographic department. Then, at seventeen years old, John took himself from Plaistow to Hampstead to knock on the door of Bill Brandt to present one of his prints. The legendary photographer invited him in, recognising his precocious talent and offering  him encouragement.

At the age of nineteen, John left the East End for good and at the same time opened his first studio near St Paul’s Cathedral. It was the precursor to a heroic career in photography which has seen John working at the top of his profession for decades, yet he still carries a deep affection for these eloquent haunting pictures that set him on his way.

“My East End’s gone, it doesn’t exist anymore. These are pictures I could never do again, I don’t have that naivety and innocence anymore, but seeing them now is like looking at an old friend.”