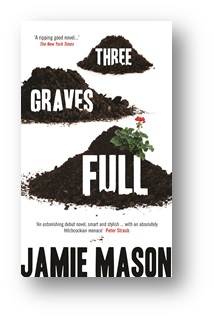 A darkly comic suspense novel which combines the humour of the Coen brothers with the tense pacing of Alfred Hitchcock. Jamie Mason spins the gripping story of lonely widower and accidental murderer Jason Getty, who lives with the guilt of having buried his victim in his backyard, only to discover two other bodies, a man and a woman, when his garden is dug up by a landscaping firm.

The persistent detectives investigating the two murders are at first unaware of the third, but old blood stains soon reveal its existence. Jason is thrown into a macabre plot of trying to cover up his deed while forging a soul redeeming friendship with Leah, the dead man’s fearless widow.