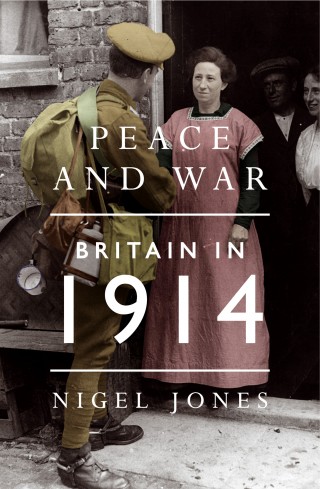 1914 dawned with Britain at peace, albeit troubled by faultlines within and threats without: Ireland trembled on the brink of civil war; suffragette agitation was assuming an ever more violent hue; and suspicions of Germany’s ambitions bred a paranoia expressed in a rash of ‘invasion scare’ literature. When shots rang out in Sarajevo on 28 June, they set in train a tumble of diplomatic dominos that led to Britain declaring war on Germany on 4 August.

Nigel Jones portrays every facet of a year that changed Britain for ever. From gun-running in Ulster to an attack by suffragettes on a Velasquez painting in the National Gallery; from the launch of HMHS Britannic to the launch of the avant-garde magazine BLAST.  Jones traces the events of a momentous year from its benign domestic beginnings to its descent into the nightmare of European war.

Stylishly written, and illustrated by more than eighty gloriously evocative images of the period, Peace and War offers a memorable and moving portrait of a society and a nation on the brink.