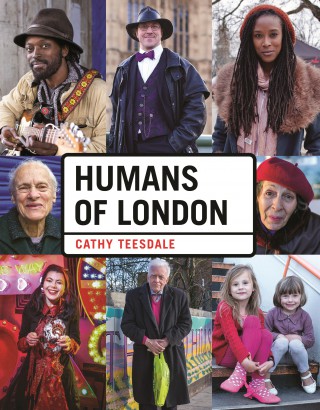 Photographer Cathy Teesdale began documenting people found in London for her HUMANS OF LONDON project in 2013. Inspired by the original Humans of New York project, HUMANS OF LONDON is part of a global movement, with people all over the world sharing their stories on dedicated Facebook pages.

Cathy found her willingness to talk to strangers and her deep faith in humanity cut through the famous British reserve and soon she was uncovering an incredible treasure trove of personal insights and unforgettable characters.

From intimate stories to spontaneous one-liners, HUMANS OF LONDON rejoices in all that this incredibly multicultural and multi-faceted city has to offer. It holds a mirror up to the beauty, the quirkiness, the darkness and the joy. Cathy’s portraits feature vivid and telling images of everyday life in London – people at home, people who are homeless, the young, the old, from those lost in thought to proud exhibitionists. HUMANS OF LONDON is an extraordinary celebration of a city with a phenomenal heart.