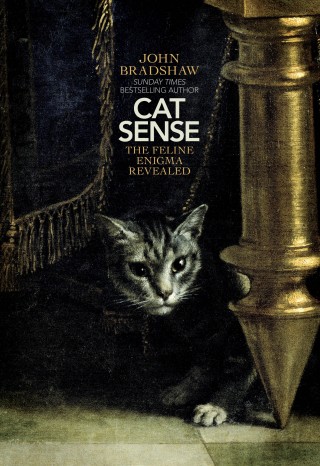 John Bradshaw, a world expert in animal behaviour and the science of animal-human interaction, follows on from his Sunday Times bestseller, In Defence of Dogs. Worldwide, cats outnumber dogs by three to one as the most popular pet; Cat Sense is a scientific portrait of the true,  surprising nature of cats and how we can better understand these intriguing animals.

John led a ground breaking experiment on cat behaviour which was the recent subject of BBC TWO’s HORIZON: THE SECRET LIFE OF THE CAT (June 2013). The programme was watched by over 5 million viewers.

Their low-maintenance independent spirit make cats the ideal urban companion. Popular in part due to the ease with which people can transpose human personality traits onto them, they still remain a mystery to most pet owners. Worshipped as gods, feared as demonic servants, seen as both wild opportunists and beloved companions, cats often seem as unfathomable, enigmatic and magical to us today as they did in ancient times. Cats have lived with humans for at least ten thousand years (far earlier than the reign of the Pharaohs), and yet they are only ever one generation from going feral. They still think like the wild scavengers and hunters from which they are descended. But, today they face unprecedented challenges in their life with humans: from conservationists who cast them as a threat to wildlife; from other cats who they compete for territory with; and from well-intentioned owners and vets with misconceptions of what they require.

In Cat Sense, Bradshaw provides fascinating insights into feline thinking. Why are cats so scared of other cats? Why do cats meow? And why do they have trouble displaying their emotions? He finds that cats need not so much our sympathy, but our understanding. Cat Sense offers us for the first time a true picture of one of humanity’s closest and most enigmatic companions.