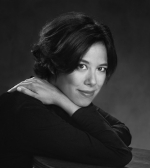 Susan Choi was born in South Bend, Indiana, and grew up there and in Houston, Texas.  She studied literature at Yale and writing at Cornell, before working for several years as a fact-checker for The New Yorker.  Her first novel, The Foreign Student, won the Asian-American Literary Award for fiction.  She has been a finalist for the 2004 Pulitzer Prize and the 2009 PEN/Faulkner Award.  In 2010 she was named the inaugural recipient of the PEN/W.G. Sebald Award.  She now lives in Brooklyn with her husband and their children, and teaches at Princeton University. Short Books publish her novel, My Education in July 2013