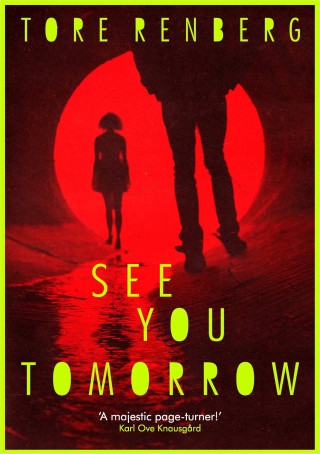 Translated from the Norwegian by Seán Kinsella

‘SEE YOU TOMORROW is an exceptional novel, as incredible as it is realistic, written with an explosive force and a pulsating passion. A majestic page turner!’  KARL OVE KNAUSGÅRD

A stunning, category-defying novel from one of the most charismatic, mesmerising authors you will ever meet. SEE YOU TOMORROW is a haunting neo-noir drama from the underbelly of the richest city in the world. Its pace will leave you breathless.

‘SEE YOU TOMORROW is an intense, riotous, funny, sexy and thrilling book, full of grit and truth. There is not a single boring sentence. This is a full voltage blast of a novel and Tore Renberg is a great writer.’ MATT HAIG

Pål has a shameful secret that has dragged him into huge debt, much bigger than he can ever hope to repay on his modest civil servant salary. He desperately doesn’t want anybody to find out – especially not his teenage daughters or his ex-wife. It is time to get creative.

Sixteen-year-old Sandra also has a secret. She is in love with the impossibly charming delinquent Daniel William, a love so strong and pure that nothing can come in its way. Not her concerned parents, not Jesus, and certainly not some other girl.

Cecilie carries the biggest secret of them all, a baby growing inside her. She can only hope that her boyfriend Rudi is the child’s father. But although she loves him intensely, she feels trapped in their small-time criminal existence, and dreams of an escape from it all.

Over three fateful September days, these lives cross in a whirlwind of brutality, laughter, tragedy and love that will change them forever. Tore Renberg has written a fast-paced, moving and darkly funny page-turner about people who are trying to fill the holes in their lives. Combining Nordic social realism and Western popular culture, horror and hope, heavy-metal music and literary marvels, SEE YOU TOMORROW is a startlingly original, eerie and hilarious novel about friendship, crime, loneliness and tragic death – that will stay with you long after the last page is devoured.

Tore Renberg is a multi-award-winning author, literary critic and Norwegian TV personality. A student of philosophy and literature at the University of Bergen, where he met lifelong friend Karl Ove Knausgård, Tore achieved major success at the age of 23, with the short-story collection Sleeping Triangle. He followed this with the novel The Man Who Loved Yngve, which made into a successful feature film. Four further novels with the same protagonist went on to sell over 400,000 copies in Norway. In addition to his work as an essayist and novelist, Tore has played in several bands, and written for the screen and the theatre. His work has been translated into 19 languages. www.torerenberg.no

TORE RENBERG WILL BE IN THE UK BETWEEN 11TH AND 17TH AUGUST. HE WILL BE APPEARING AT VARIOUS EVENTS ACROSS THE UK INCLUDING THE EDINBURGH FESTIVAL.