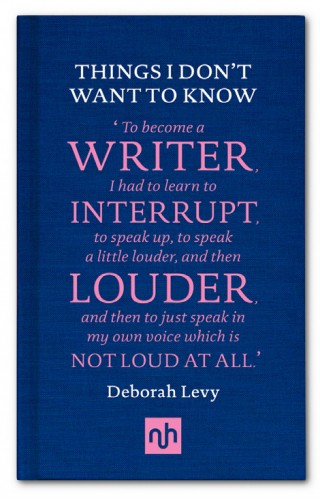 Things I Don’t Want to Know

A response to George Orwell’s Why I Write. Orwell identified four key motivations for his work, Political Purpose, Historical Impulse, Sheer Egoism and Aesthetic Enthusiasm, Levy explores each of these blending memoir, gender and identity politics, philosophy and literary theory addressing the many motivations and inspirations behind her writing.

“Perhaps when Orwell described sheer egoism as a necessary quality for a writer, he was not thinking about the sheer egoism of a female writer. Even the most arrogant female writer has to work over time to build an ego that is robust enough to get her through January, never mind all the way to December.”

By Deborah Levy. Shortlisted for Man Booker Prize 2012. Profound and thrilling, Swimming Home reveals how the most devastating secrets are the ones we keep from ourselves.

A brutal, unforgiving world is richly evoked in this spirited and riveting account of a tough Philadelphia childhood ‘Prostitution, gambling, fencing, contract murder, loan sharking, politicalcorruption and crime of every sort were the daily trade in Philadelphia’sTenderloin, the oldest part of town. The Kevitch family ruled this stew for halfa century, from Prohibition to the […]