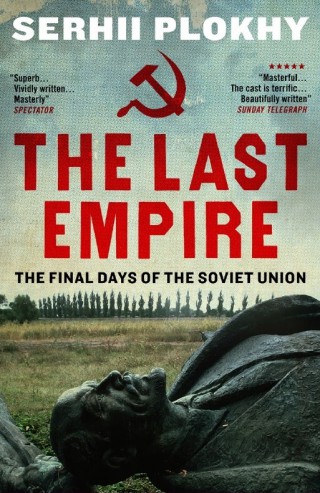 The Last Empire: The Final Days of the Soviet Union

‘Fascinating and readable… both compelling and sobering… Today, Russia has revived, and Putin wants his lost republics back, giving this book an additional relevance’

Daily Telegraph, Books of the Year

On Christmas Day 1991 Mikhail Gorbachev resigned as president of the Soviet Union. By the next day the USSR was officially no more and the USA had emerged as the world’s sole superpower. Award-winning historian Serhii Plohky gives us a vivid account of the preceding five months of dramatic events, including the failed coup and Yeltsin’s machinations around Gorbachev.

Honing in on this previously disregarded but crucial period and based on new sources and exclusive interviews with the presidents of the two superpowers, Plokhy shatters the established myths of 1991 and boldly argues that the US actually wanted to preserve the Soviet Union and keep Gorbachev in power. With its spellbinding narrative and strikingly fresh perspective, this is the essential account of one of the most important turning points in world history.

‘Wonderfully well-written… explains as no one in English has until now, just how central Ukraine was to the viability of any sort of Soviet bloc… it’s bracing and timely… well worth reading’