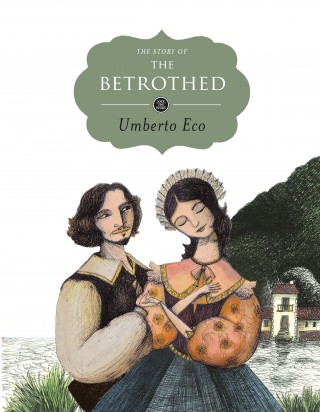 Save the Story Series; The Betrothed

“This marriage is not supposed to happen.” Lombardy, 1628, a time of oppressive Spanish occupation of Northern Italy, and of the Thirty Years’ War. The young lovers Lorenzo and Lucia, both from peasant families, are planning their wedding. However, the villainous Don Rodrigo has designs on Lucia, and the lovers are forced to flee their village. Their dangerous journey in exile takes them through one of the most dramatic epochs in Italian history, filled with war, famine and plague – will they ever be able to find happiness together?

Beautifully illustrated, this is part of a 10-book series of the world’s great stories retold for children, published by Pushkin Press in 2013/14

Save the Story is a library of favourite stories from around the world, retold for today’s children by some of the best contemporary writers, including Alessandro Baricco, Umberto Eco, Dave Eggers, Yiyun Li, Ali Smith and A. B. Yehoshua. The stories they retell span cultures (from Ancient Greece to nineteenth century Russia, time and genres (from comedy and romance to mythology and the realist novel).

THE BETROTHED BY UMBURTO ECO

THE NOSE BY ANDREA CAMILLERI

CRIME AND PUNISHMENT BY A B YEHOSHUA

Save the Story Series; The Betrothed's related campaigns