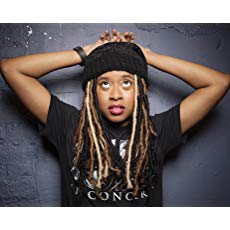 Phoebe Robinson is a stand-up comedian, writer, and actress who has been recognised by Bust, Vulture.com, Essence, O, The Oprah Magazine, and Buzzfeed.com as a rising star, as well as the author of the New York Times bestseller, You Can’t Touch My Hair.  Most recently, she and Jessica Williams turned their hit WNYC Studios podcast, 2 Dope Queens, into four one-hour HBO specials.  Robinson has also appeared on the Late Show with Stephen Colbert, Late Night with Seth Meyers, Conan, Broad City, Search Party, The Daily Show, and the Today show; she was also a staff writer on the final season of Portlandia.  When not working in TV, she’s the host of the critically acclaimed WNYC Studios interview podcast Sooo Many White Guys.  She made her feature film debut in the Netflix comedy Ibiza, released last year.