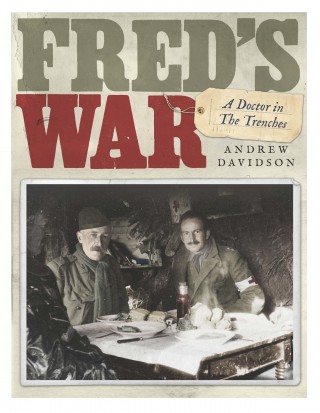 Fred Davidson embarked for France from Southampton at 10pm on the warm night of 15 August 1914. He was 25 years old, a minister’s son

from Montrose, newly qualified in medicine, newly trained in the Royal Army Medical Corps, and newly acquainted with his fellow officers in the 1 st Battalion, Cameronians. For the next eight months, as medical officer, he stood by their side as they fought through France and Belgium — driven back at Mons, pushing through the Marne, entrenching around Armentieres. And packed away in his medical supplies was his folding camera, which Davidson used whenever he could – sharing his love of photography with fellow officers who also, clandestinely, took pictures of life in the front line.

This book shows his remarkable photographs for the first time, and those taken by his friend Captain Robert Money and other Cameronians who broke Army rules to document their war. The author, Fred’s grandson, pieces together the stories behind the pictures that have passed through his family for three generations — the men who fought with Davidson, the conditions they served in, the battles they saw and the horrors they witnessed before one by one, they were killed, wounded or transferred. Fred Davidson was shipped home in March 1915, shot in hip and hand, one of the first doctors to win the Military Cross, having twice been mentioned in despatches.

Played out against the First World War’s key early stages, the book offers an unusually intimate portrait of life among a band of brothers, the same men who later dubbed themselves ‘Old Contemptibles’ – their proud riposte to Kaiser Wilhelm’s alleged jibe at Britain’s “contemptible little army”. It also examines just how ill-prepared doctors like Fred were for the carnage they faced, and asks, how did they cope?

Al Murray’s memoir of his childhood fascination with history and all things war.