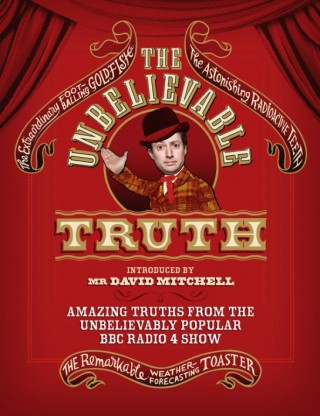 by Graeme Garden and Jon Naismith Introduced by David Mitchell

The Unbelievable Truth is the hugely successful BBC Radio 4 panel show fronted by award-winning actor, comedian and writer David Mitchell in which panelists have to identify the preposterous truths from the lies.  Now the book of the series presents hundreds of hand-picked mind-boggling facts in a cabinet of curiosities, introduced by David Mitchell:  ‘The unbelievable truths have sloughed off their surrounding plausible lies and stand alone: reliable, interesting, funny and odd – like a classic line-up of the show’s panelists.’

A zebra crossed with a horse is a ‘zorse’

Prince Philip was born on a kitchen table

Also included is a series of comic essays by Dr Graeme Garden, the radio show’s co-inventor, for the reader to experiment with their very own truth-detection skills.  Covering a diverse range of subjects from Armadillos to Sir Walter Raleigh each essay contains five incredible truths, tantalisingly concealed amongst a host of barely credible lies.

The Unbelievable Truth was first broadcast on BBC Radio 4 in 2006.  Now approaching it’s 12th series, it is the most downloaded radio programme on iPlayer each month it is broadcast.  Show producers Graeme Garden and Jon Naismith share a wealth of experience in the development and production of first-rate comedy and entertainment for radio and television.