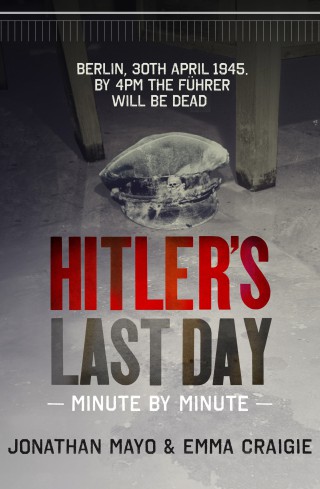 American and Russian forces have linked up in the middle of Germany, but the fighting continues. The roads of Germany are full of people – Jews who have survived concentration camps, Allied POWs trying to get home, and Nazis on the run. The civilian population under German control will run out of food in less than a fortnight. The man whose dream of a thousand-year Reich began this nightmare is in a bunker beneath the streets of Berlin saying his farewells. By 3pm he will be dead.

Hitler’s Last Day: Minute by Minute, is pure chronological narrative, as seen through the eyes of those who were there in the bunker, those waiting for news back home, or fighting in the streets of Germany, or pacing the corridors of power in Washington, London and Moscow. It was a day of endings and beginnings when ordinary people were placed often in extraordinary situations.

Take Sisi Wilczek, fleeing the advancing Russians with her family’s vast fortune in a shoebox; President Truman, weighing up the consequences of using the atomic bomb that his Secretary for War calls ‘the most terrible weapon ever known in human history’; German officer Rudolf Weiss, fleeing Berlin by stealing a canoe from a boat club; or Allied aircrews tying parachutes to their own food parcels so they can drop them to the starving Dutch population.

Jonathan Mayo joined the BBC in 1987, first working in radio and then television, where he won awards for his documentaries. He is the author of The Assassination of JFK: Minute by Minute and D-Day: Minute by Minute. He lives in Surrey with his wife and son.

Emma Craigie is a writer and teacher. She is the author of Chocolate Cake with Hitler and Who Was… King Henry VIII. She lives in Somerset with her husband and four children.