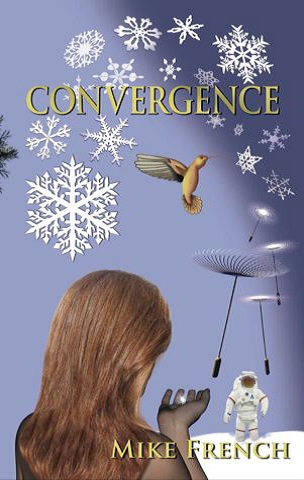 Definition: Convergence Point – a lifetime’s worth of memories contained within an infinitesimally small amount of time.

When the Convergence Project manages to record a Convergence Point, a shimmering orb is brought into being that expands out destroying the earth. Inside the Orb is paradise, a beautiful, sun-drenched, lush environment where humanity and nature fuse and beauty, love and hope are woven into the landscape….

The Convergence Project is a covert military/governmental science project that uses prisoners on death row to explore what happens to people as they die. The experience of life flashing before your eyes, just before death is a process called active retrieval where memories are being recalled and lived out again in the mind. As the amount of time before death decreases, the brain exponentially increases the speed of playback and starts looping: repeating over and over a lifetime’s worth of memories. Each playback makes the memories stronger and retains more detail. Eventually an infinite playback speed is reached, forming a memory singularity called a Convergence Point, where the ‘moment’ lasts for ever and the person effectively enters an afterlife of their own making.

Killing subjects by lethal injection within an enhanced Magnetic Resonance Imaging Core, brain activity can be imaged moments before the Convergence Point forms. The ‘near’ Convergence Points are downloaded into neutral clones which effectively decode the brain patterns back into memories. These Convergence Clones are subjected to psychoanalysis to try to gain an understanding of the death experience.

Featuring an extraordinary cast of characters and a labyrinthine plot that twists and turns, Convergence is unsettling, ambitious, lyrical and utterly gripping.