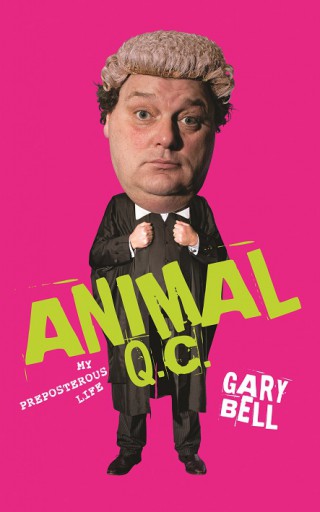 GARY BELL QC is a pillar of the Establishment and one of Britain’s leading lawyers, with his own BBC TV series, an entry in Who’s Who, and a wife whose family is listed in Burke’s Landed Gentry.

But beneath the horsehair wig and silk gown, there is a man with an astonishing story to tell.

Born the son of a teenaged cigarette factory worker and a nineteen- year-old miner, Gary Bell grew up in a condemned slum and left his tough comprehensive school without taking any exams to follow his father down the pit.  He quit coalmining because of his lifelong fear of the dark, and spent the next decade as a homeless unemployed drifter or working in a strange variety of jobs… door-to-door rag salesman, lawnmower mechanic, fireman, bricklayer, shelf-stacker, forklift truck driver, pork pie baker… In between, he found time to rack up a conviction for fraud (he worked out how to fix the payouts on pub fruit machines) and became a notorious football hooligan known as ‘Animal’ (though not for his fighting prowess).

He pulled himself together and went to university in his mid-twenties as a mature student. But with his stonewashed jeans, skinhead hairstyle  and  flat  vowels,  he  stuck  out  from  his  younger, public school-educated contemporaries – so he amused himself by deciding ‘to become upper-middle class’, adopting tweeds, received pronunciation and an Old Etonian tie. (He was so convincing that many Eton College alumni swear they were at school with him – he’s even had the front to go ‘back’ to compete as an Old Boy in ‘Field Game’ fixtures against the school team.)

And now he’s one of the country’s top defence barristers, specialising in complex and high-profile fraud cases. Extremely funny, immensely likeable, with an extraordinary knack for being in the right place at the right time, Gary Bell is a true one-off, whose preposterous story reads like a strange dream.

Hilarious, moving, and utterly life-affirming, you’ll be willing him on every step of the way.