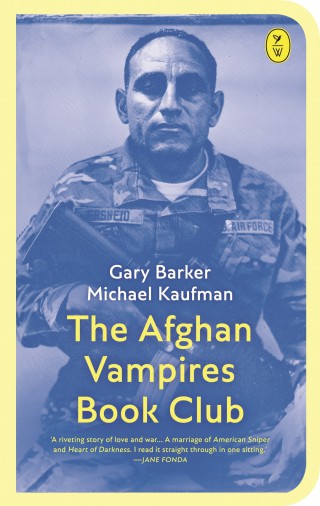 The letter was headed: ‘The Afghan Vampires Book Club: An Invitation.’

We were to gather the most improbable, disturbing, and unbelievable stories coming out of the two-and-a-half decades of the Afghan War. ‘The goal, my dear friends, is to figure out if the story is true or pure invention.’

In the 25th year of the US-Afghan War, two hundred US soldiers are massacred. Amongst the growing number of dis­carded veterans, rumours circulate that one soldier made it out alive. When British journalist John Fox finally tracks down Captain Tanner Jackson, he hears an astonishing tale of violence, conspiracy and revenge – but also of enduring love. Part anti-war fable, part page-turning dystopian adventure, The Afghan Vampires Book Club is a thrillingly contemporary novel about American’s war in Afghanistan. This satirical examination of how the US treats its war veterans will reshape your understanding of what endless war inflicts, not only on the men and women who become soldiers, but on us all.