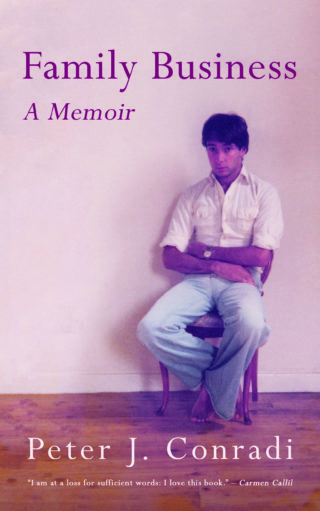 Family Business includes a cast of characters ranging from the author’s European Jewish forebears who came to Britain in the Victorian era to influential novelist and philosopher Iris Murdoch, whose biography Conradi himself wrote.  The arc of Conradi’s story travels from the relative integration of his ancestors to his rebellion against this and his long association with Murdoch, another outsider in English society.

Against the upwardly mobile successes of his immigrant ancestors – with their exotic stories – and his relationship with his beloved grandmother came the more immediate dysfunction of his parents’ marriage.  Young, clever, bisexual Peter became a ‘knight errant’ protecting his mother, and set a precedent repeated later in his friendship with Murdoch.  In between Conradi relates his public school education, being a kibbutznik, taking part in the early years of gay rights and becoming a writer.

In the final chapters of this enthralling biographer’s autobiography Conradi explores his long and close relationship with Iris Murdoch and John Bayley.  Conradi was both Murdoch’s biographer and during her last years, her carer, and has much to say on the world of Murdoch and Bayley.